When we moved to Denver in 2008, we of course began a search for new everything.  New church, new places to eat, new grocery store, new coffee shops, new dentist, new doctors, new pediatrician – the works.   Luckily the neighborhood had an online mommy group.  Some affectionately called them the “Highland’s Mafia”, but I mostly thought they were lifesavers.  Anything I was looking for, I could post the question online and many a helpful mommy would respond.

By way of the online group, I found a wonderful pediatrician.  On our first visit, we went through the usual measurements, etc.  The Dr. reviewed the measurements and provided the percentile statistics for height and weight.  He paused when he reviewed the Lola’s head measurements.

To which I quickly respond, “I don’t know Dr.  My husband has a huge head.  No really, he has a hard time finding caps that fit him.”

The Dr. smirked which I’m pretty sure translated into, “That’s what all the mom’s say.  It’s the husband’s fault.”

I thought twice about trying to convince him that even my husband would admit to this, because I knew it would lessen my credibility as a I totally know what I’m doing  parent.  He re-measured.  Lola’s head was still in the high 90 percentile, but no longer literally off the chart.

Fast forward to a couple weeks ago, my husband and I purchased a Carhart sweatshirt.  I won’t even go into all the details as to why we both have an obsession with Carhart products – it’s not rational or fashionable.  It just is.  The important thing is that  the sweatshirt was only $5.  Score.  It was the only sweatshirt left so we agreed to share.

Last Friday was a little chilly so I thought I would complete my “I just wanna wear sweats all day” look with the newly purchased Carhart sweatshirt.  Since I managed to lock myself out of the house around lunchtime, I had to swing by my husband’s work to pick up a key.  I asked nonchalantly if he had trouble getting the sweatshirt over his head.  He said it was a little tight.  Sadly, those kind of questions are rarely left alone and are usually followed by a why.  I then admitted that when I had put on the sweatshirt,  my head felt like it was in a vice grip as I tried to pull it over my head.  I removed my glasses in the false hope that the thicker frames were the reason the sweatshirt was so tight around my normal-sized head.  In the instant I confessed, I realized that maybe it’s not just my husband, but it could be me that has a big head too.  Maybe that explains the pediatrician’s smirk.  Or maybe he was an avid Mike Meyers fan.. 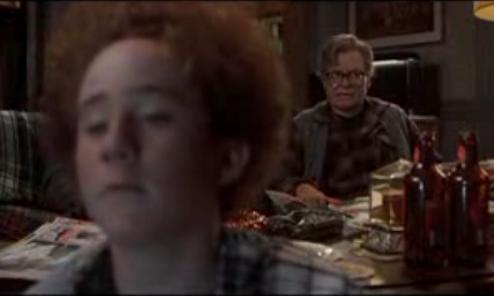 “I’m not kidding, that boy’s head is like Sputnik; spherical but quite pointy at parts. Now that was offside, wasn’t it? He’ll be crying himself to sleep tonight, on his huge pillow.”

-Stuart Mackenzie (Mike Meyers), So I Married and Axe Murderer (1993)