Mosquitoes are the original vampires 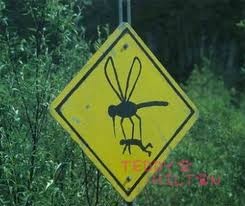 The thing is that mosquitoes are everywhere. It’s not like they congregate on beaches. Or maybe they do. And of course there are some mosquitoes that are worse than others. You know, like the ones that carry yellow fever?  I’ve heard those are the pits. But really, mosquitoes are generally unwelcome in my book. They pretty much suck. Yeah, I just did that. I completely and totally used a cliche pun. That’s what happens when you write about mosquitoes.

But mosquitoes exist pretty much in every part of the world. The beaches of Peru are no different.  My mother always warned me not to go outside of protective netting when the sun is not out. Something about the darkness that draws out mosquitoes. I’m starting to think that Stoker was originally inspired by blood sucking mosquitoes but realized that bats would be more compelling. Mosquitoes can be easily squashed, bats not so much.

Except in Peru the mosquitoes are invisible. Or at least they are invisible to me. It’s not like in Texas where they are 1. Ginormous. No really. You can see them coming a mile away. 2. Sloooooow. I can’t claim the fastest reflexes so when I say I’ve killed quite a few mosquitoes in my day, it’s not because they are fast fliers. It’s because they are so slow. In Peru you don’t know there are Mosquitos until you notice the next day the various bites covering your body. My husband asked me are they vampires or are they ninjas. Oh. My. God. I don’t even know. What if they are both?  We are so doomed.

Again, I knew all this. It has been ingrained it in my head, and I’ve experienced the dangers of these ninja vampire insects firsthand. All this to say, I was prepared. Did you know that a couple of drops of clove oil in half a lemon is supposed to ward off mosquitoes?  Did you know that when you rub a couple drops of clove oil on the inside of your arm, you know the most sensitive part of your skin, it feels like your skin is on fire?  I thought my arms were going to spontaneously combust.  It was a little bit like the time I went to a spa and the lady said she was going to apply a mild chemical peel to my face and that it might burn a “little”.  It burned a lot. A whole lot. My arms felt like they were undergoing a chemical peel.

So bring on the deet because I think the clove oil is more harmful to my health. So much for my attempt at homeopathic remedies.