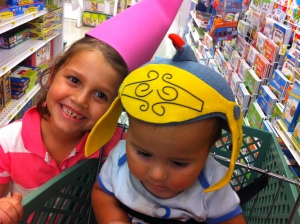 I recently purchased a paper doll set at the insistence of my 6-year-old daughter. Most people would probably rejoice that a child would dare chooses a tactile toy versus life sucking technology. I think – waste of money. The dolls and everything included will most likely tear before the end of the day. I also think – I refuse to play. Think what you want, but despite having been an avid Barbie enthusiast as a child, I no longer enjoy playing dolls. Watching animated films? Yes. Playing pretend with dolls? Sorry, I’m out.

It doesn’t help that most of the pretend is centered around the outfits worn, balls attended, getting engaged to a prince, and subsequent wedding. You could say that the realities and responsibilities of adulthood have replaced fairy tales with cynicism but I wasn’t ever that girl. I played with Barbie, but I never dreamt of my wedding or getting married. One has to wonder why I even owned so many Barbies at all. It was the clothing and the hair, people. Always the clothing and the hair. Oh, and the shoes. One musn’t forget Barbie’s awesome array of shoes.

Worse is that in all this, I feel like I have somehow failed my daughter. Maybe I pushed Barbie ownership too soon. Maybe I should have evaluated my reasons for playing Barbie before I made the first purchase.  Maybe I should have been less worried about her lack of interest in baby dolls and just enjoyed swinging on swings for hours on end. Maybe my love of animated films should have taken a back seat to frequent walks in our neighborhood or bike rides. Maybe I can blame our desire to pinkify and princess-up everything so that toys are gender appropriate and appealing to little girls. Or maybe I can just let her be a princess, a well-rounded princess, mind you.

During bed time the other night, my daughter wanted to play paper doll princesses instead of reading a bedtime book. As I mentioned before, I lack in this department. Dress them up, yes. Actually play pretend? Not so much. I have no story lines to work with so I mostly follow my daughter’s lead – outfits, balls, engagement, wedding. Or a small bit of torture. But a momentary spark of brilliance occurred that night. Once our dolls were dressed, after the general pleasantries, the spark occurred. Before my daughter could invite my doll to attend the ball I said, “Did you have a chance to feed the hungry today”?

Yes, I did. I turned playtime into social issue time.  Why not?  Isn’t that why Marie Antoinette was beheaded?  So completely out of touch with the people that when they were starving, she is attributed to having said “Let them eat cake”?

The two-second pause that followed my question was enough for me. Thinking, well-rounded princesses are ok with me.