We headed to Aspen on Day 4 because Glenwood Springs had very little snow and a whole lot of rain. We may not have signed on for a ski trip, but we definitely drove out to Colorado to see some snow.

It was a glorious day in Aspen. The sun was shining, the snow was pristine. It felt like we were turning a corner. Clearly the elevation was misleading me. I exaggerate. It wasn’t that bad. It was more like riding a roller coaster – thrilling, scary, and a whole lot of screaming.

I would like to take a moment to declare that my husband is a genius and so is the town of Aspen. You’re not into skiing? Come hang out with us at our awesome Rec Center. I think I saw that slogan on one of the Aspen brochures. Seriously though – indoor pool, sled rentals including awesome sledding hill, cross country ski area, ice skating. Kudos, Aspen for having an awesome place to play and my husband for always finding these gems.

As with any roller coaster ride, we started out slow and in a good place but that was short lived. We couldn’t find the sledding hill and the 3 year old was obsessed with holding on to large snowballs. You know what happens when you drop a snowball? Tears.

We finally realized the sledding hill was right behind us. It was covered in snow and blending in with its surroundings, can you blame us for missing it? For the next few hours, it was mostly bliss. There were squeals of laughter, snowballs, and sledding. My husband and I even kept up with our new workout regimen. Need a workout while on vacation? Drag a sled up hill with a 35 lb toddler. Who needs a fancy gym?

squealing and laughter all the way down the hill

and this is bliss

Our 3 year old discovered the awesomeness that is eating fresh snow. He soon began referring to it as his cake. Yes, buddy that is your snow cake, just don’t put anything in your mouth is not exceptionally white. Yellow and dirty gray or brown cake will be the end of your snow eating bliss.

After we had our fill of snow activities, we headed to lunch. Down we went on the roller coaster. After negotiating about the timing of when the cup of fruit loops would make their appearance, we finally made it to our lunch spot. It wasn’t exactly the best grilled cheese I’ve ever had, but the fruit crepe made up for it. Of course who cares about that, when your meal choice is two suckers and some fruit loops. 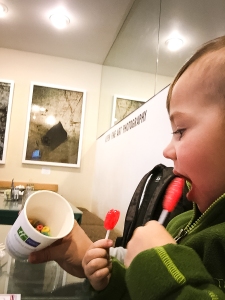 We didn’t really see any point in sticking around Aspen to walk and shop with a sugar high, cranky 3 year old so we headed back to Glenwood Springs. The car ride was uneventful and sadly was not accompanied by a nap. I proceeded with fear and trepidation because I had no idea what the future would hold given the continued lack of sleep and abundance of sugar. But I was mistaken, we were back on track. We rested at the hotel while the kids played. They even built a clubhouse in between their beds. I almost ruined the peace and quiet when I checked on them. Rookie mistake. Thank goodness, they went back to their clubhouse and ignored my intrusion.

this is only allowed at places where someone else cleans up

It was the calm before the storm. We spent 15 minutes calming the 3 year old down because he was flailing and crying about leaving the room to grab dinner. 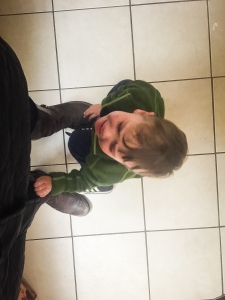 If only those 15 minutes meant that we would enjoy our dinner. It never fails that when you think you have your kids figured out they change their minds. We ordered a cheese pizza slice and a pepperoni slice because the 3 year old often demands that the pepperoni be picked off. Not this time. His poor sister, she deserves an award for putting up with the tyrant. He demanded her pepperoni pizza and then to make matters worse proceeded to remove the cheese from the crust. I should also point out that both at lunch and at dinner, the 3 year old had regained the need to sit on my lap while dining. Balancing a squirmy 3 year old is hard work. Balancing a squirmy 3 year old while trying to eat your food without it landing in his head or having his food or drink land in your lap is next to impossible. Dinner was over quickly and so was the day.

Of course, it only makes sense that should you eat little at dinner then you will most likely be hungry at bed time. This is the point in the day where your parenting abilities are tested. And because I clearly excel in this area, I handed the 3 year old a piece of bacon, and ushered him into his bed.