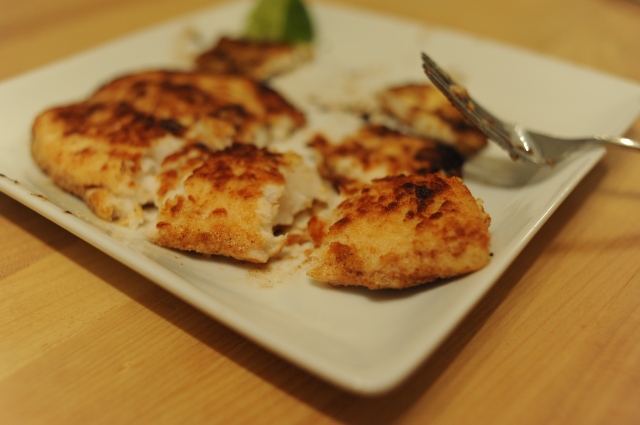 In an effort to be healthy, my husband and I try to cook more instead of eating out.  Surprisingly, it also saves money.  Who knew?  I would say that 80% of the time, we do a pretty good job of cooking healthy, balanced, yummy meals.  We try new recipes, we like them, we put them in the rotation.  Most meals we plan and cook ahead, but on some week nights, it’s important to have a quick meal that we can throw together in a pinch.  Our go-to is fish.  Fish is healthy, pretty easy to put together and cooks fast.  Friday night was a huge cooking fail.  Huge.

Fail #1 – We used coconut flour instead of almond meal.  Yes, we’re weird.  Coconut anything without sugar added is supposed to be better for you than your typical bleached flour.  I thought it would be nice to try.  Why not?  Don’t get me wrong, I still love bleached, not good for you flour, but I try to shake things up every once in a while.  I should have used the almond meal I normally use.  The coconut flour gave the fish a weird texture, kinda like eating something with dust on it – not at all crunchy.

Fail #2 – I heated the oil too high.  I blame Denver.  Not the actual city, but the rental house we lived in.  The rental house had a pretty old cooktop range.  By old I mean that there were no letters that designated the settings.  How do you tell if it’s set on high?  If the blue flames are tall, then it’s on high.  Not only that, but if you tried to turn the flame down, it actually just went out.  So we always cooked at a high temp.  Always.  Not ideal, but whatever.  If you know anything about cooking, you know that when you cook at high temps, sometimes the outside cooks, but that doesn’t necessarily mean that it’s cooked all the way through.

My first clue was when I used my fork to cut into the Tilapia filet, it did not cut through like a hot knife through butter.  Uh oh.  Let’s be clear, this was not meant to be a sashimi plate.  Not at all.  Not cooked through.  Great.  And yet, I persisted to see if the coconut flour was worthy of a repeat.  So I cut through the thinnest peice of the filet.  Dusty not crunchy.  That’s too bad, I was hoping the coconut flour would prove worthy.  I don’t think I’ll try it again.